This hand knotted silk carpet is based on an oil painting by Austrian artist Gustav Klimt called The Kiss.

The Kiss (in German Liebespaar, Lovers) is an oil painting, with added silver and gold leaf by the Austrian Symbolist painter Gustav Klimt, and was painted between 1907 and 1908 during the height of Klimt's "Golden Period". The painting depicts a couple embracing one another, their bodies entwined in elaborate beautiful robes decorated in a style influenced by the contemporary Art Nouveau style and the organic forms of the earlier Arts and Crafts movement.

Gustav Klimt depicts the couple locked in an intimate embrace against a gold, flat background. The two figures are situated at the edge of a patch of flowery meadow that ends under the woman's exposed feet. The man wears a robe printed with geometric patterns and subtle swirls. He wears a crown of vines while the woman wears a crown of flowers. She is shown in a flowing dress with floral patterns. The man's face is not shown to the audience and instead, his face is bent downward to press a kiss to the woman's cheek, and his hands are cradling the woman's face. Her eyes are closed, with one arm wrapped around the man's neck, the other resting gently on his hand, and her face is upturned to receive the man's kiss. 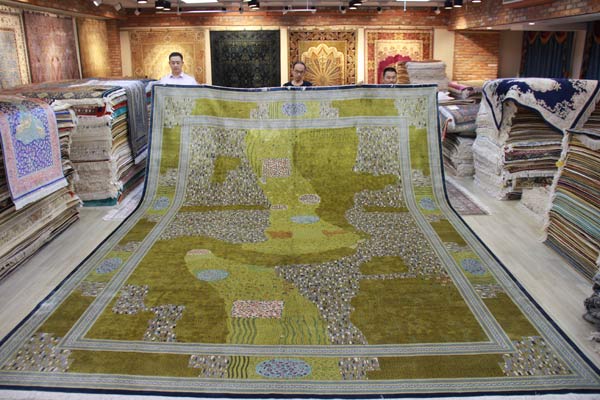