Turkish rugs have been highly prized since the 13th century and are considered glorious, collectible works of art. Despite being handmade by nomadic tribes and mountain-dwellers, the rugs’ artistry, luxurious texture and ornate styling bespeak the opulence and wealth of the Ottoman empire. Palaces during the Ottoman reign were heavily laden with luxurious commissioned rugs.

Each rug usually was accompanied by a miniature version called a yastik, which would originally have been folded to make a sort of pillow or draped over sofas to decorate a living room. Trademark Turkish styles feature geometric shapes, clean designs and saturated colors.

There are many different types of Turkish rugs, with each type featuring its own texture and design and representing a specific time and place:

Kilim: Kilim rugs were produced by migrating nomads, called “Yürüks,” who traveled through the regions of Anatolia, the Balkans and parts of Iran, in often severe climactic conditions, and they lived in tents. They made these pileless flat-weave rugs to cover the tent floors and prevent the insides from becoming damp. As such, they were made of goat hair, which is stiffer than sheep’s wool, making the tent almost waterproof. Some kilims were made as prayer rugs, which are smaller and are designed to include the recognizable architectural feature mihrab, found in mosques and indicating the direction of Mecca in which to turn for prayer. Kilims feature bright colors and tapestry-like textures.

Oushak: These rugs are made using a particular family of designs that originate in Uşak, Turkey. They’re recognizable for their large scale. They’re predominately made from lustrous wool and silk and feature muted earth tones such as cinnamon, saffron, green, ivory and gray. Usually they feature geometric pattern and you will find them with an allover design or with a central medallion motif.

Soumak: Stronger and thicker than a kilim, a Soumak features a flat weave that gives the rug its name. The weave provides a smooth front face and rough back — a herringbone effect that resembles embroidery — whereas a kilim is smooth on both sides. It’s stronger than a kilim though still pileless. The colors found in Soumaks are bright and vibrant.

Interestingly, the human figure is considered sacrilegious and therefore is rarely seen on Turkish rugs and kilims. They may be used to remember a departed family member, however.

Typical symbols in Turkish rugs include:

Star: The Turks of Central Asia once believed that the movement of stars affected people’s destinies and influenced the world’s daily matters. Seeing a star during a dream was considered a sign of happiness.

Mihrap: a praying niche pattern featuring a place of honor for a king or God, surrounded by flowers, vases and fountains, seen as a gate to Paradise.

Tree: may be seen individually or in a group, symbolizes unification and reincarnation, the tree of life, life’s regenerative processes

Plane Tree: the Garden of Eden

Swastika: the wheel of destiny, a symbol of good luck, abundance and fertility, may symbolize the sun and stars

Pomegranate: fertility, the seeds also represent the faithful assembling in church. The pomegranate is still seen as a strong token of fertility in Turkey; during marriage ceremonies, friends and relatives throw pomegranate seeds at the couple and use the scattered seeds to foretell how many children the couple will have.

Elibelinde, or “hands on hips”: a stylized female, symbol of motherhood and fertility, seen especially on Anatolian textiles

Fruits and cereals: those with many seeds, including pomegranate and figs, as well as grains such as wheat and barley symbolize fertility

Eye: widely used on kilims, one of the most powerful symbols, used to ward off evil, all good or bad comes through the eyes

Eye and Arrow: An eye flanked by arrows symbolizes good luck, wish for a good harvest, good luck at hunting

Hooks: protection, used to surround symbols for health and happiness

Hair band: Presented to a bride during a wedding ceremony, a hair band symbol in a rug symbolizes the desire for marriage, happiness and good luck.

Earring: a gift to a bride during marriage ceremony, symbolizes marriage and expectations for marriage

Chest: For Anatolians, the chest symbolizes a bride’s trousseau

Bird: higher state of being, angels, supernatural help, message from other worlds, happiness, unexpected good news. May be seen on rugs perching on the tree of life.

Camel: importance of camels for the tribal people who make rugs

Burdock: plant that sticks to clothing and animal hair and wards off evil eye, symbolizes abundance 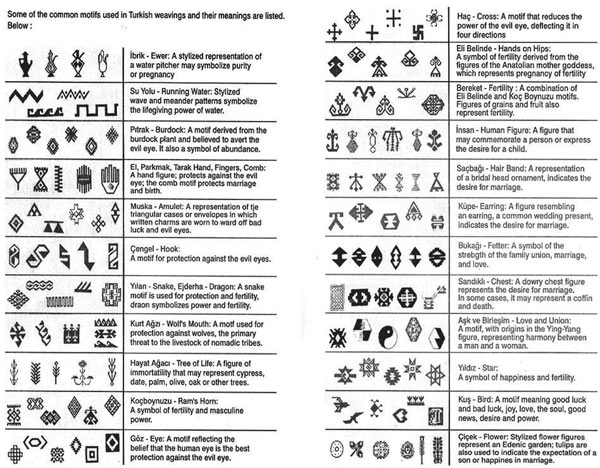